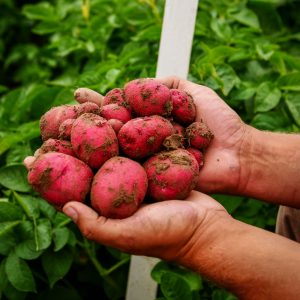 While both Scott and Laci have agriculture roots, neither would have imagined they would be growing seed potatoes today. Scott spent his childhood on a dairy farm in southern Idaho, and Laci grew up on a diversified ranch in Twin Bridges. Her great-grandfather Guy George was one of the first pioneers to grow seed potatoes in Montana.

After graduating from the University of Minnesota with a master’s degree in Plant Breeding in 2011, Laci knew she wanted to get back to Montana. She jumped at the chance to take over a small seed potato business in her hometown. Scott, who was in law enforcement at the time, picked up the farming bug and joined Laci on the farm full-time in 2013. The couple continues to specialize in garden seed varieties and early generation seed potato production.